Order catalogue
I herewith have read and accept accept the TERMS AND CONDITIONS (link) the privacy policy (link). I consent to use my e-mail and telephone. 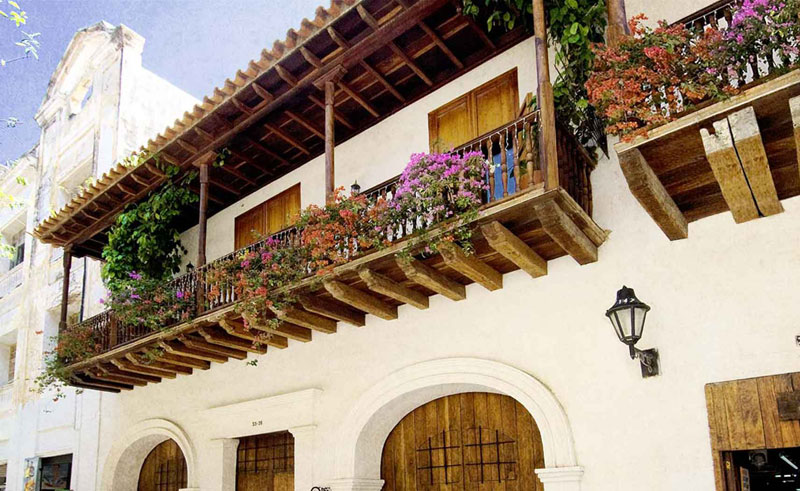 The house from the 17th century underwent a restoration process in order to combine the comfort and elegance from a typical colonial house of Cartagena with the services of a modern boutique hotel. The décor and furnishings, with antiques and charming old pieces, pretend to introduce our guests to the history of this city and transport them through time.

Alfiz Hotel Boutique is located in the center of the walled city, between the two oldest squares in the city: the Plaza de Bolivar and Plaza de la Aduana. One block from the Governor Palace, the Cathedral and within 500 meters from the Convention Center of Cartagena de India

Each of our eight en-suite bedrooms are specifically dedicated to the most important periods of Cartagena‘s history, from the time the conquers arrived to the heroically independence. This allows our guests to experience a piece of Colombian history while enjoying their memorable stay in the Alfiz Boutique Hotel.

The Conquest Room
This room is decorated in honor to Pedro de Heredia, who founded the city on the 1st of June 1533 as San Sebastián de Calamar. However another Spanish conqueror, Juan de la Cosa, urge him to rename it as Cartagena de Indias.

Indigenous Room - Our original culture
When the Spaniards arrived they met the Carib tribes who inhabited this region. They lived in palm huts, slept in hammocks and painted his body with achiote. They smoked tobacco and drank chicha. A legend tells about Catalina, a beautiful indian women, who served as interpreter for conquistador Heredia, falling in love for him.

The Colony Room - Living testimony of this era
During the colonial era Cartagena was one of the largest ports in America. From here the treasures were shipped to the Spanish Crown by maritime routes ending in the ports of Cartagena, Cadiz and Seville. Also, this city was the gateway for thousands of African slaves forcibly brought to America as labor force for Encomenderos.

The Pirates Room
Attracted by the treasures that came from Cartagena to Spain, the city was several times attacked by English and French pirates. For this reason the Spanish crown decided to protect the city with a wall and several fortresses making it the most complete defensive system in America.

The Independence Room - Sacrifice for Freedom
We have dedicated this room to those men that on 11th November, 1811 gave in Cartagena the final declaration of absolute independence from Spain. But soon the Spanish military Pablo Morillo besieged the city in a last effort to reconquest it for Spain, killing half of its inhabitants and leaving it in ruin. After this attack, the liberator Simon Bolivar gives the name of „the Heroic City“.

The Viceroyalty - The representation of the monarchy
The suite room is inspired by this historical period. The Viceroyalty was especially important in the Spanish Crown for the enormous accumulation of territories that due to its dispersal couldn‘t be managed centrally. The Viceroyalty of New Granada (1718-1819) was the name given to the colonial provinces that currently make up Colombia. A pompous reception waited always the Viceroy at his arrival in Cartagena.

The Republic - The consolidation of a nation
During the republican period (1863 -1903) begins the total transformation of the nation thanks to a new constitution. President Rafael Nuñez, a native of Cartagena, was the main driving force that allowed the unification of the fragmented country so far marked by violence and conflicts between political parties.